In my opinion this face is the new Kate Moss. She’s fun, she’s flirty and is constantly in the media for dating the wrong guy or for infamous photo of her dropping a bag of white power whilst leaving a club in NY.

Lets not even begin to mention her number 10 ranking on models.com or her short yet punchy career.

Delevingne is currently the face of Burberry‘s Beauty campaign alongside fellow British models Edie Campbell and Jourdan Dunn. She was previously the face of Burberry’s spring/summer 2012 campaign shot by Mario Testino alongside actor Eddie Redmayne,[4] and was also featured in the brand’s spring/summer 2011 campaign. As a young girl she modelled for Cadbury chocolate ads as well.

Delevingne has featured in advertising campaigns for other brands including H&M Authentic Collection (2011), Dominic Jones Jewellery (2012), Blumarine, Zara, and Chanel. She was recently described by British Vogue as the “star face” of the autumn/winter 2012-2013 show season, having appeared on the catwalk for brands such as Shiatzy Chen, Moschino, Jason Wu, Oscar de la Renta, Burberry, Dolce & Gabbana, Fendi, Stella McCartney, and Chanel.

And she’s only been modelling for less then 10 years.

Perfection if you ask me. 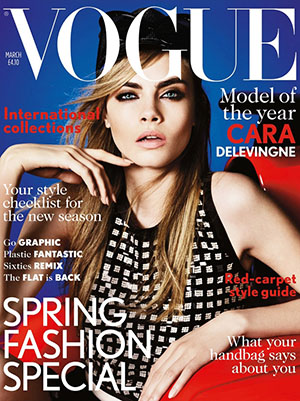